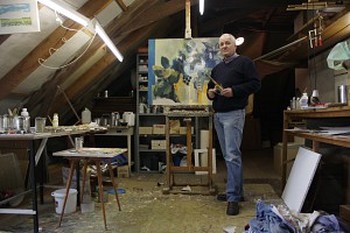 Bart ten Bruggecate obtained his HBS-b certificate in 1971. After several years of study (medical science, psychology and academy of arts), he decided in 1975 to pursue art as a career.
Apart from other motives, this decision was sparked by his frequent contacts with the well-known Dutch painter and graphic artist Edlef ter Haar Romeny (1926), a close family friend currently residing in France.
Living in Haaksbergen in the region of Twente, Bart ten Bruggencate mainly creates oils on canvas in which landscapes, flowers and still-life objects feature prominently. For his drawings on paper, watercolor painting or screen printing, he makes use of gouache, charcoal and “biester” (powdered walnut bark mixed with indian ink).
In addition to uncommitted work, ten Bruggencate accepted numerous commissions and gradually established a name for himself as a portrait painter.
He was also commissioned to design several sculptures realized in bronze in close cooperation with the Boekelo (NL) sculptor Bert Nijenhuis.


SETTINGS (PIECES OF SCENERY) AS FOOD FOR THOUGHT
“Each painting – whether figurative or abstract in character – is essentially nothing more and nothing less than an accumulation of paint on a canvas”.
It is this indisputable truth that the artist Bart ten Bruggencate holds on to. His paintings of landscapes, flowers and inanimate objects are by no means copies or reproductions. He makes no attempt to imitate reality, but lets the motif (suggest) (reveal) itself to him as the basis for the painting. It might even be said that he “suppresses” the objects in his paintings in his urge to transform them into a pictorial reality. A reality not imposed by external rules, but a reality where the artist’s intuition reigns supreme.
Ten Bruggencate lets the visual objects speak for themselves and directs and modifies wherever necessary, using colours to emphasize either harmony or contrast, sharply defining shapes or, on the other hand, allowing them to fade into each other, blurring contours and turning background into foreground or vice versa, applying lines at the edges of the canvas to divert attention from the centre, painting bands of light as naturally as it is supposed to fall until he considers the painting to be a harmonious entity.
The conceptual motif is then no longer apparent. The bottles and bowls, flowers and horizontal lines seem to have been “eroded” by the paint. And yet, they are still discernible to such an extent as to trigger the spectator’s imagination.
The term used by ten Bruggencate to characterize his paintings is “pieces of scenery as food for thought”. The paintings are deliberately left untitled in order to lend full scope to the spectator’s associative capacity.
drs. Judith Toering
KUNSTWERK, jaargang 11 nr. 5 november/december 1999